“I believe in… the Resurrection of the Body” 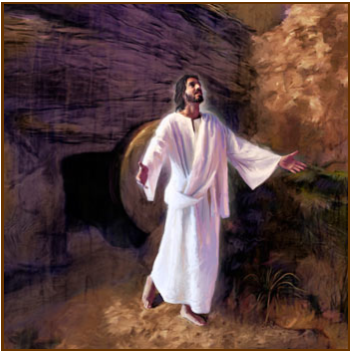 “Jesus said unto her, I am the Resurrection, and the Life.  He that believeth in Me, though he were dead, yet shall he live; and whosoever liveth and believeth in Me shall never die. Believest thou this?”
—John 11:25–26 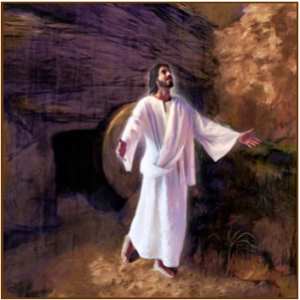 In His words to Martha, the grieving sister of the then dead Lazarus, Jesus declared Himself to be “the Resurrection and the Life” for all who confide in Him, and thereby not only comforted Martha’s sad heart but also gave true comfort in the face of death to Christians of all time.  Everlasting life is here promised to all those who have been brought to saving faith in Christ—whether they have already fallen asleep in the Savior (“he that believeth in Me, though he were dead, yet shall he live”), or are currently still alive here on earth (“whosoever liveth and believeth in Me shall never die”).  After thus proclaiming life everlasting and victory over death for all who trust in Him, Jesus asked Martha the following question: “Believest thou this?”  Of course, Jesus already knew that Martha believed this, but He was prompting her to confess her faith with her mouth; and she did so very nicely with the reply: “Yea, Lord: I believe that Thou art the Christ, the Son of God, which should come into the world” (v.  27).  Three verses before this, Martha also confessed her faith in the resurrection, saying: “I know that he [her dead brother, Lazarus] shall rise again in the resurrection at the Last Day” (v. 24).

Now you and I may also take the very same question of the Lord Jesus as if it were directed to each one of us individually, namely, “Believest thou this [the promise of eternal life through faith in Him who is the Resurrection and the Life]?”  Like Martha, we Christians do believe in a glorious resurrection unto life everlasting through our Savior Jesus Christ, and should likewise also confess it.  To deny the resurrection of the dead would naturally lead to a denial of Christ’s resurrection, which is a fundamental doctrine of the saving Christian faith!  The Apostle Paul writes in his first letter to the Corinthians: “If there be no resurrection of the dead, then is Christ not risen; and if Christ be not risen, then is our preaching vain, and your faith is also vain.  Yea, and we are found false witnesses of God because we have testified of God that He raised up Christ, whom He raised not up if so be that the dead rise not.  For if the dead rise not, then is not Christ raised; and if Christ be not raised, your faith is vain; ye are yet in your sins.  Then they also which are fallen asleep in Christ are perished.  If in this life only we have hope in Christ, we are of all men most miserable” (15:13–19).

Not surprisingly, worldly-wise unbelievers typically regard faith in the resurrection of the dead to be completely irrational, since all their observations in the world lead them to the conclusion that death is final and irreversible.  What may seem surprising, however, is that the “modernists” of our day and time, people who call themselves “Christians,” including even some “Lutherans,” also deny the physical resurrection of the dead in spite of the many passages of Scripture in which the resurrection is clearly taught.  Like the modern rationalists of today, the Sadducees of Jesus’ day also denied that the dead will be raised and sought to make the Savior look foolish when He defended this doctrine.  However, they only succeeded in revealing their own spiritual ignorance, as the Lord declared to them: “Ye do err, not knowing the Scriptures, nor the power of God” (Matthew 22:23–32).  Indeed, those two points of ignorance (regarding the Scriptures and regarding God’s power) account for the incorrect reasoning of all who deny the resurrection of the dead.  It is impossible to know and believe what the Scriptures say of the resurrection while still being of the opinion that the dead will not be raised.  Likewise, it is impossible to believe in an all-powerful God while also maintaining that raising the dead is beyond His ability.

Because the Bible plainly teaches that all the dead will be raised up on the Last Day (John 5:28–29), everyone who claims to respect the teachings of the Bible should certainly also believe, teach, and confess without shame or reservation that the dead will rise.  And because our God is omnipotent (all-powerful), there should be absolutely no doubt at all that He can bring a dead and decayed body back to life from the dust and ashes (Luke 1:37), just as it was not beyond His power to create the living body of Adam out of the dust of the ground in the beginning (Genesis 2:7).  It does not matter in the least that human science and medicine are unable to restore life to a dead and decayed body; nor does it matter that none of us have ever observed people coming back to life after they have long been dead.  We Christians believe in the resurrection of the dead, not because we have seen it happen before, but because our faithful God has told us that it will happen on the Last Day (I Corinthians 15:51–52).  Likewise, we know that the dead will be raised, not because we believe that advances in science and medicine will one day make this possible for man to accomplish, but because “with God all things are possible” (Matthew 19:26).

“Believest thou this?”  Most certainly, because the omnipotent Lord God has said so!  Thus our faith in the resurrection is not without basis, nor is it mere wishful thinking; but it has the most sure and solid foundation that there can possibly be—the infallible Word of the Lord!  Consequently, we Christians have no need of “scientific evidence” or tangible, visible proof of the resurrection in order to believe in it; for as the Scriptures declare: “Faith is the substance of things hoped for, the evidence of things not seen” (Hebrews 11:1).  But why is the clear testimony of Holy Scripture fully sufficient for us to believe in the resurrection of the dead, when the unbelievers scoff at the Bible and reject it as being no evidence at all?  This is because despisal of the Lord goes hand in hand with despisal of His Word, whereas those who are the beloved children of God by faith in Christ Jesus (Galatians 3:26) accept and treasure the Word of their Lord and Savior.  Accordingly, Jesus told the unbelieving Jews: “He that is of God heareth God’s Words; ye therefore hear them not because ye are not of God” (John 8:47).  Of course, we are only “of God” and hear His Words because the Holy Ghost has worked saving faith in our hearts (I Corinthians 12:3) through the power of the Gospel (Romans 1:16; 10:14, 17); so our gracious God and Lord gets all the credit, glory, and thanks for bringing us to faith in Christ Jesus and thereby also working in us confidence in the resurrection of the dead.

When Jesus told Martha, “Whosoever liveth and believeth in Me shall never die,” He was not promising Christians that they will never meet temporal death—the death of their bodies (the separation of the soul from the body).  Rather, He who is “the Resurrection and the Life” promises all believers that they will have eternal life in heaven in spite of temporal death here on earth (“though he were dead, yet shall he live”).  On account of our Savior’s work of redemption, life everlasting awaits us on the other side of the grave.  Since in the resurrection of Christ we have the assurance of our forgiveness (Romans 4:25), we know that our souls will not be condemned to eternal destruction in hell but will be taken to heaven when we die, there to receive the promised fullness of joy and pleasures forevermore in the presence of the Lord (Psalm 16:11).  It should be understood, however, that the resurrection of Christ not only assures us of salvation for our souls, but also for our bodies.  On the Last Day, death will be completely undone since our bodies will be restored to life and be reunited with our souls.  By inspiration of the Holy Ghost, St. Paul foretells our victory over the grave, writing in his first epistle (letter) to the Corinthians, in chapter 15: “This corruptible must put on incorruption, and this mortal must put on immortality.  So when this corruptible shall have put on incorruption, and this mortal shall have put on immortality, then shall be brought to pass the saying that is written, ‘Death is swallowed up in victory.’  O death, where is thy sting?  O grave, where is thy victory?  The sting of death is sin, and the strength of sin is the Law.  But thanks be to God, which giveth us the victory through our Lord Jesus Christ” (vv.  53–57).

Whether we are young or old, death can befall any of us at any time.  Unless the Lord Jesus returns first, all of us will experience temporal death.  For some, this may seem like a depressing thing to think about; but it certainly need not be for us Christians.  We have the Gospel-generated confidence that in Christ’s victory over death each one of us shares in that victory!  Since, therefore, the grave has been conquered for us, and eternal bliss and glory (for both body and soul) await us in heaven, we can look forward to a blessed departure from this earthly life.  Clinging to our resurrected Savior, who is “the Resurrection and the Life” for all those who trust in Him, every one of us may confidently declare in the words of Job: “I know that my Redeemer liveth, and that He shall stand at the latter day upon the earth.  And though after my skin worms destroy this body, yet in my flesh shall I see God, whom I shall see for myself; and mine eyes shall behold, and not another, though my reins be consumed within me” (Job 19:25–27).

Jesus lives!  The victory’s won!
Death no longer can appal me!
Jesus lives!  Death’s reign is done!
From the grave Christ will recall me.
Brighter scenes will then commence.
This shall be my confidence.

Jesus lives! and now is death
but the gate of life immortal;
This shall calm my trembling breath
when I pass its gloomy portal.
Faith shall cry, as fails each sense,
“Jesus is my confidence!”