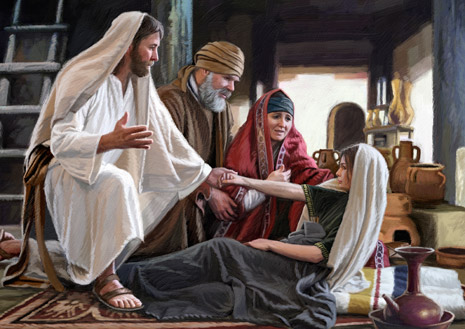 At one time, when a great multitude crowded about our Lord at the sea shore of Capernaum, one of the rulers of the synagogue, Jairus by name, sought Him.  And when he saw Him, he fell down at His feet, and besought Him greatly, saying: “My little daughter lieth at the point of death: I pray Thee, come and lay Thy hands upon her, that she may be healed and she shall live” (Mark 5:23).  And Jesus went with him.  And a great multitude followed Him.

Now when they approached the house of Jairus, some of his people said to him: “Thy daughter is dead; why troublest thou the Master any further” (v. 35).  But Jesus heard it and said to Jairus: “Be not afraid; only believe” (v. 36). And He allowed no man to follow further, except Peter and James and his brother John. And He cometh to the house, and seeth the tumult, and them that wept and wailed greatly.  And He confronted them, saying: “Why make ye this ado, and weep?  The damsel is not dead, but sleepeth” (v. 39).  And they laughed Him to scorn, knowing that she was dead. And Jesus put them all out, and He taketh the father and the mother of the damsel and the three disciples, and entereth in where the damsel was lying. “And He took the damsel by the hand and said unto her: ‘Talitha, cumi’ (v. 41a), which, in English, is “Damsel, I say unto thee, ‘Arise.’  And straightway the damsel arose and walked” (vv. 41b-42a).  She was twelve years old and an only daughter.  “And they were astonished with a great astonishment” (v. 42b).  And Jesus charged them straitly that they should tell no man.  And He commanded to give her to eat (v. 43).

In the sight of the Lord Jesus, death is a mere sleep, even your death and that of your loved ones.  Right easily can He awaken all His own from death to eternal life, and He certainly will do it on the last day.  Let your dead who have died “in the Lord” (Revelation 14:13) be at rest, and rejoice that they are with the Savior.  Jesus will waken their bodies when He will come again.  With our death, as believers, sometime in the future, we can confidently confess with the Apostle Paul: “O death, where is thy sting?  O grave, where is thy victory?  The sting of death is sin, and the strength of sin is the Law, but thanks be to God, which giveth us the victory through our Lord Jesus Christ” (I Corinthians 15:55-57).

PRAYER – Lord Jesus Christ, my Savior, who with Thy blood did cancel all of my sins, and turned bitter death into a peaceful sleep, grant that I may never join the scoffers of this world, who want to keep me from believing in Thy sure and certain words and promises concerning death and the life hereafter.  Keep me attached to Thee, my precious and priceless Vine.  Amen.

What God ordains is always good; His will abideth holy.

As He directs my life for me, I follow meek and lowly.

My God indeed, in ev’ry need, doth well know how to shield me;

to Him then I will yield me.