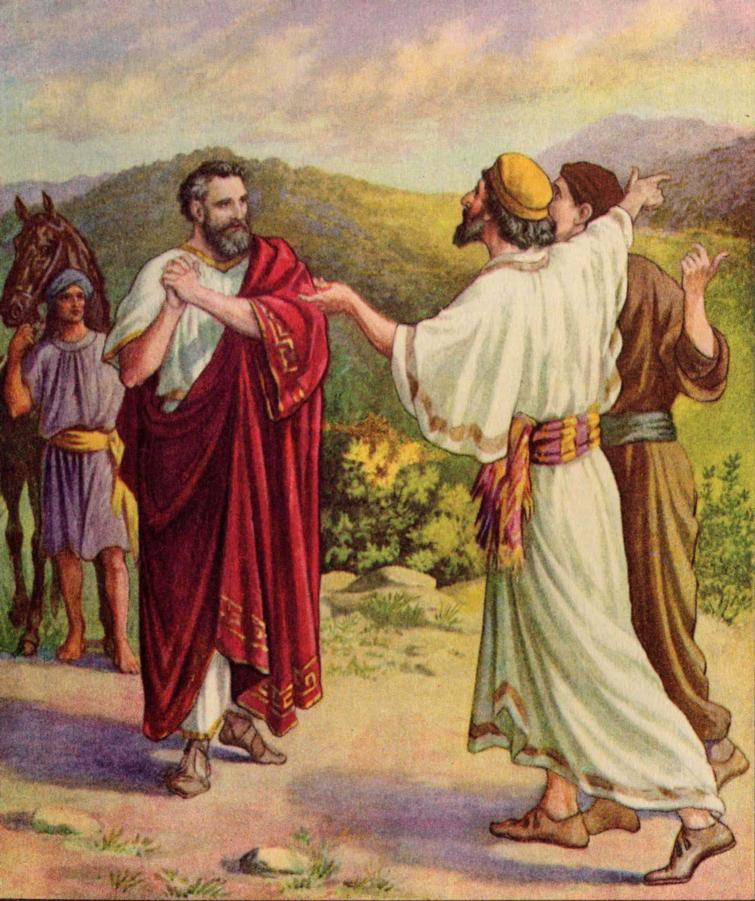 The time had now come that Jesus was to appear in public, and by preaching and working miracles was to manifest Himself as the Son of God and Savior of the world.

He did this first in Judea, in Jerusalem and the country south of Jerusalem, for more than half a year.  Then He went to Galilee, coming again to Cana where He had performed His first miracle.  In Capernaum, about five or six hours’ walk from Cana, there lived at this time a certain nobleman, a government official, whose son was at the point of death.  When he heard that Jesus was at Cana, he went to Him and besought Him that He would come down to Capernaum and heal his son.  Jesus said to him: “Except ye see signs and wonders, ye will not believe” (John 4:48).  But the man kept on entreating Him and said: “Sir, come down before my child die” (v. 49).  Jesus said to him: “Go thy way; thy son liveth” (v. 50a).  The man believed the word that Jesus had spoken to him, and went his way.  The next day his servants met him, saying: “Thy son liveth” (v. 51).  Then enquired he of them the hour when he began to mend.  And they said: “Yesterday at the seventh hour [one o’clock in the afternoon] the fever left him” (v. 52).  So the father knew that it was in the same hour in which Jesus had said to him “Thy son liveth.”  And he himself believed, and his whole house (v. 53).

Thus did Jesus manifest His divine glory – by a mere word spoken from a distance, He healed the sick.  And thus did the nobleman prove his faith – he relied on and trusted in the word of Christ.  Through His written Word, “the good tidings of great joy” (Luke 2:10b), Jesus now gives you the forgiveness of sins, life, and salvation on account of the redemption wherewith He has perfectly “redeemed” (Galatians 3:13; I Peter 1:18-19) you.   Believe this Word of “grace and truth” (John 1:17), go your way day-after-day, and rely, in life and at death, on this “Word of reconciliation” (II Corinthians 5:19) from God through Christ.  Rest and depend on this Word of “comfort” (I Thessalonians 5:11; see also I Thessalonians 5:9-10), even though you may not feel or see anything of its power.  Jesus’ Word will not ever deceive you; He “cannot lie” (Titus 1:2).

The Gospel shows the Father’s grace, who sent His Son to save our race;

proclaims how Jesus lived and died, that man might thus be justified.

It sets the Lamb before our eyes, who made th’ atoning sacrifice;

and calls the souls with guilt opprest, to come and find eternal rest.

May we in faith its tidings learn, nor thanklessly its blessings spurn;

may we in faith its truth confess, and praise the Lord our righteousness.