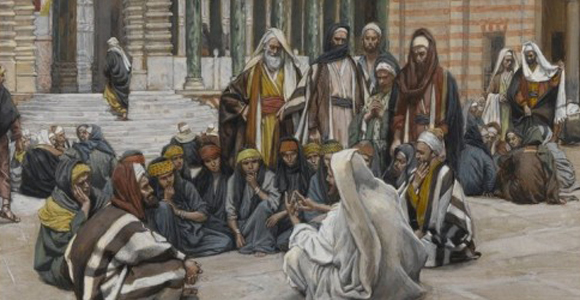 Be not ye called Rabbi; for one is your Master, even Christ; and all ye are brethren. — Matthew 23:8

Rabbi means Master. The word Rabbi denotes a person who in the Christian Church claims for himself a spiritual authority above others, and hence also honor and respect in preference to others, as the Pope does and his priesthood.  But Christ does not want such Rabbis in His Church and in His kingdom.

To those who hold an office in the Church He says: “Be not ye called Rabbi.” And He furthermore says to them, as well as to the Christian laity: “For one is your Master, even Christ; and all ye are brethren.” And to all His Christians He says: “And call no man your father upon the earth, for one is your Father, who is in heaven” (v. 9).  In view of this I ask: What about the “Holy Father” of the Roman Church together with his many “Fathers,” the priests?  In the worldly, civil governments there are masters indeed, and there is authority, and due respect must be paid to those in authority, and each according to his station, or the power he is vested with.  There is also parental authority.  But in the kingdom of Christ, there is nothing of the kind.  There, we believers, without distinction, are brethren of one another.  There Christ alone is the Master.  He rules in this kingdom by means of His Word, and solely by means of this Word.

If a pastor preaches the Word of God to his congregation, the congregation should obey and follow that Word of God; but in that case it is not obedience to the pastor himself, but to Christ and to the Word which the pastor preaches to his people.  If the humblest and poorest and least respected member of the congregation speaks a word that Christ has said in the Holy Scriptures, the whole congregation should obey at once; for it is Christ, their Master, who speaks through this person.  And if the pastor, or any church official, or the most highly respected person in the congregation says anything that is different from Christ’s Word, it is of no value.  One is our Master, even Christ, who “made Himself of no reputation, and took upon Him the form of a servant and was made in the likeness of men; and being found in fashion as a man, He humbled Himself and became obedient unto death, even the death of the cross” (Philippians 2:7-8) for us and for the whole world of sinners, that death which paid to God “the wages” (Romans 6:23a) for our sins, giving us “eternal life through Jesus Christ, our Lord” (v. 23b).

What a humble Master who won “the victory” (I Corinthians 15:57) for us over sin, death, the devil, and hell!

PRAYER – Lord Jesus, the only Master of Thy Church, continue with Thy Word of truth and grace to rule over my heart, my mind, and my entire life during all of my remaining days in this world.  This is my bold request as I come to Thy “throne of grace” (Hebrews 4:16). Amen.