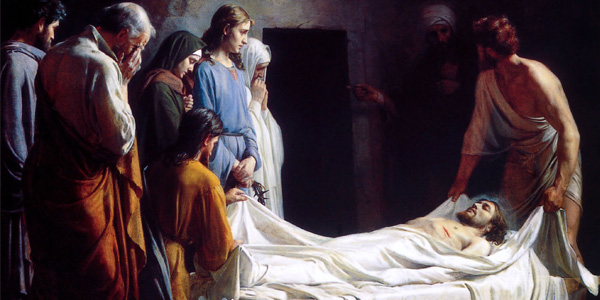 Come, my people, enter thou into thy chambers and shut thy doors about thee; hide thyself, as it were, for a little moment, until the indignation be overpast. – Isaiah 26:20.

Jesus had died upon the cross. What did they do with His body? – In Jerusalem there lived a member of the chief council named Joseph of Arimathea, a city of the Jews. He had not consented to the counsel and deed of them, for he was a good and just man, and waited for the kingdom of Christ; indeed, he was a disciple of Jesus, but secretly, for fear of the Jews. He went boldly to Pilate and besought him that he might take the body of Jesus from the cross. And Pilate marveled if He were already dead; and calling unto him the centurion, he asked him whether He had been any while dead. And when he knew it, he commanded the body of Jesus to be delivered unto Joseph.

And Joseph bought fine linen for the burial of Jesus. And there came also Nicodemus, who at the first came to Jesus by night, and brought a mixture of myrrh and aloes, about a hundred pound weight. After they had taken the body of Jesus down, they wrapped it in a clean linen cloth, and wound it in linen clothes with the spices, as the manner of the Jews is to bury.

Now, nigh to Golgotha there was a garden and in the garden a new sepulcher, a tomb that belonged to Joseph, which he had hewn out of a rock, wherein was never man yet laid. There then laid they Jesus because of the Jews’ Preparation Day. Soon it would be six o’clock, the great Paschal Sabbath was drawing nigh. This place, however, was near at hand. And they rolled a great stone to the door of the sepulcher and departed. Mary Magdalene and Mary, the mother of Joses, also were there, sitting over against the sepulcher; other women also who came with Jesus from Galilee beheld how and where His body was laid. Then they likewise departed, and prepared spices and ointments to anoint the body of Jesus. And they rested the Sabbath day according to the ceremonial command.

Now we who confide in the atoning death of the Savior need not fear the grave at all. For us Christians it is to be a chamber where we are to sleep, and where no man will be able to wake us. There we shall he hidden, as it were, for a little moment; there we shall rest in peace until the wrath of God against the wicked world will be overpast.

PRAYER. – Merciful and kind heavenly Father, who didst cause Thy Son to die for my sin and be buried in the tomb, grant that in true faith I may be united with my Savior, and ever remain so, that by virtue of His all-atoning death my death may become a blessed sleep, my grave sanctified, and that, finally on the Last Day, I may rise again unto everlasting joy, through the same, Thy dear Son, Jesus Christ, my Lord. Amen.

Life of my life,

Thou’rt in the tomb reposing,

Round Thee now a rock-hewn grave,

Breath of all breath!

I know from death

Thou wilt my dust awaken;

Wherefore should I dread the grave,

Or my faith be shaken?

To me the tomb

Shall be a room

Where I lie down on roses;

Who by faith hath conquered death,