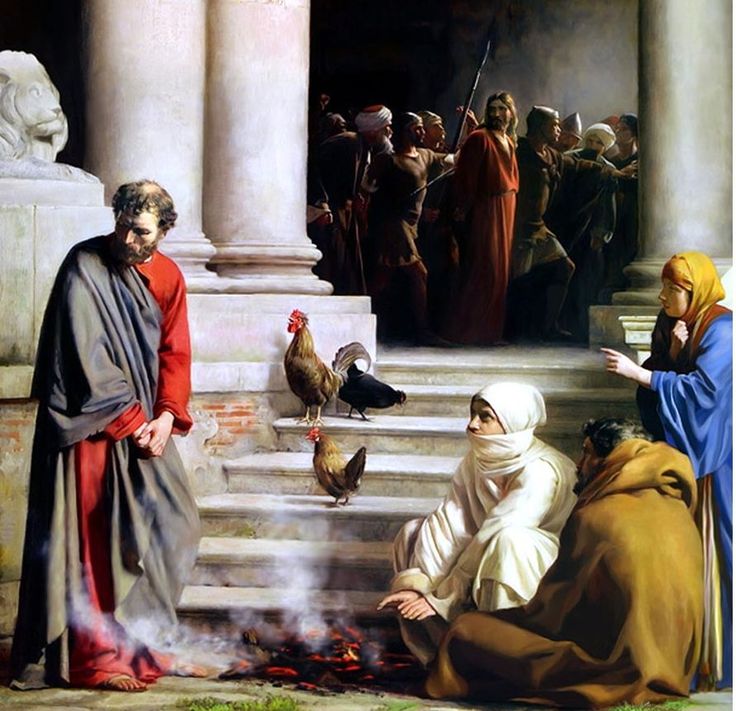 By Him therefore let us offer the sacrifice of praise to God continually, that is, the fruit of our lips giving thanks to His name. – Hebrews 13:15.

When Jesus was led from Gethsemane to Jerusalem, John and Peter followed afar off. When He was brought into the high priest’s palace, John, who knew the high priest, also entered. But Peter stood outside. Then John went out and spoke to the maid that kept the door and brought in Peter, who then went into the inner court, where the servants had made a fire of coals for themselves, for it was cold.

And after standing there awhile, he sat down among them and warmed himself. He wanted to see what would happen to Jesus. Then the maid that kept the door followed him, looked closely at him, and said: “Thou also wast with Jesus of Galilee.” And turning to the servants, she said: “This man was also with Him.” But Peter denied before them all and said: “Woman, I am not; I know Him not, and I know not what thou sayest.” And the cock crew the first time. – Meanwhile the things we heard yesterday transpired with Jesus. Peter foolishly remained in the company of Jesus’ enemies. And another maid said: “This fellow also was with Jesus of Nazareth.” And one of the servants said to Peter: “Thou art also of them.” Then Peter denied for the second time, with an oath, and said: “Man, I am not! I do not know the Man.” – After a while, about an hour later, those who stood by came to Peter and said to him: “Surely, thou also art one of them; for thy speech bewrayeth thee”—referring to the way that he talked in the Galilean dialect. And one of the servants of the high priest, being a relative of that Malchus whose ear Peter had cut off, said to him: “Did I not see thee in the garden with Him?” Then Peter began to curse and to swear, saying: “I know not this Man of whom ye speak.” And the cock crew the second time. And the Lord turned and looked at Peter. And Peter called to mind the word of the Lord: “Before the cock crow twice, thou shalt deny Me thrice.” And he went out and wept bitterly. Peter was truly ashamed and repentant.

What can we learn from lesson of Peter’s denial? We can clearly see what we should do and what we should not do. Since our dear Lord gave His life for our salvation and sacrificed Himself for us, we, who believe in Him, will offer the sacrifice of praise, which includes confessing His name freely, gladly, and boldly. We certainly should not deny our precious Redeemer and dearest Friend! —Have you ever in any way denied your Savior before the unbelievers and the wicked? Has the fear of persecution or the sinful desire to be like the unbelievers caused you to deny Christ by word or action, or by silence and inaction? And when Jesus most graciously turned to you, did you, like Peter, repent?

PRAYER. – Help me, O my Lord and Savior! Without Thy help I can do nothing. I cannot remain true to Thee unless Thou sustainest me. Let me never rely on my own ability; for then I shall fall. Have I not fallen in various ways? But Thou, dear, kind Savior, didst always raise me again. Lord, graciously keep me, lest I fall again! And if I should fall again, do not leave me lie, but be my constant Savior, my Helper! Amen.

Through Him we heirs of heaven are made;

That we may firmly trust in Thee

And through Thee live eternally. Hallelujah!