A Look Ahead on the New Seminary Year 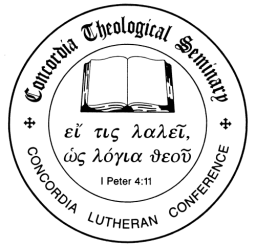 “And the things that thou hast heard of me among many witnesses, the same commit thou to faithful men, who shall be able to teach others also.”  — II Timothy 2:2

In this directive to Timothy, the Apostle Paul, on behalf of the Holy Ghost (I Corinthians 2:13), sets forth a special mission to those who have already studied for the work of the Holy Ministry and have shown themselves approved unto God as workmen that need not to be ashamed, rightly dividing the Word of Truth (II Timothy 2:15).  It is their solemn duty to pass along to others what they themselves “have heard,”  “correctly understood and sincerely embraced” (from the wording of the Seminary Diploma) in the course of their own studies, namely, the pure teachings of Holy Scripture as these have been established and confirmed by the sedes doctrinae or “prooftexts” of the Bible.  It is therefore both our duty and our privilege, motivated and enabled by the Gospel (Romans 1:16; II Corinthians 5:14; I John 4:19; II Corinthians 3:6), not to shun to declare unto our students “all the counsel of God,” as St. Paul himself exemplified this solemn charge in his own preparation of the pastors in Ephesus (Acts 20:27).  Thorough theological training is therefore the fifth object of our Concordia Lutheran Conference (Constitution, Article III), since God’s Word, and not merely church tradition, makes this a priority matter among us.

Moreover, we are charged to commit to our students not the “creative” theology of rationalists and modernists, who make up what they teach as they go along, not on the basis of Scripture but on the basis of their own sin-blinded reason, nor what might be called the “revisionist–” or “revisitation–” theology of those who despise the authority and clarity of the sedes doctrinae and insist on subjecting those “clear and certain” texts, which neither need nor permit of interpretation, to the repeated and periodic scrutiny of exegesis on the basis of the latest hermeneutics to see whether they are still as clear as they once were.  If we followed their method, we would never be sure of anything; and “the apostles and prophets” would no longer be our “foundation” (Ephesians 2:20) but only a perpetual petri dish in a theological laboratory that “bears watching” as Christian doctrine “evolves.”  Indeed, Paul’s exhortations to Timothy and to Titus regarding sound doctrine (I Timothy 1:3, 11; 4:7, 13, 16; 5:17; 6:1, 3; II Timothy 3:10, 16; 4:2-3; Titus 1:9; 2:1, 7, 10) would be completely meaningless because its “soundness” would be the shifting sand of uncertainty.  It is not the Word of God that is to be tried or tested, but those who teach and preach — as to whether they are teaching and preaching according to it (I John 4:1; cf. Romans 16:17-18; I Timothy 6:3-5).

By the grace of God, we embarked upon the second year of full-time teaching and learning in our beloved seminary on September 7th.  Again joining Jason A. Mabe, who has been studying on a part-time basis since September 2006, were David J. Mensing and Daniel P. Mensing as full-time students, together with James E. Bielefeldt, who at present is auditing courses pending his official matriculation into the program.  Dave, Dan and Jim are pursuing second-year studies — catching up with Jason; and all four will, God-willing, be on the same full-time track in September of 2011 in the third year of our theological curriculum.  Somewhere along the line, Jim will close the gap with the others after completing the equivalent of three semesters of German, two semesters of Ecclesiastical Latin, and four semesters of his practicum, courses which he elected to skip while studying part-time.

This year, the course load is “light” by one class since Dave and Dan, having entered the seminary with credits in German, took Latin (normally a second-year course) as first-year students along with Jason last year already.  That leaves six second-year courses to complete this year:  Dogmatics II (Anthropology through Christology) and Old Testament Isagogics (the study of the content of the Old Testament books) — both of which are being taught by Professor Lietz — and the third semester of New Testament Greek and Exegesis (Interpretation) of Romans, which are taught sequentially, as well as Church History I and the Principles of Teaching (including the psychology of learning, teaching methodology and Catechetics) — all of which are being taught by Professor Mensing.  The seventh “course” (2 credit hours per semester) is the Practicum or internship, which includes keeping a log of personal daily devotions, sketches of the local pastor’s preached sermons, summaries of meetings attended and Bible Classes taught, and participation in the liturgy of worship services, as well as a sampling-load of such routine tasks as bulletin production, servicing the chancel for services, duplication of Sunday School and Bible Class materials, and the publishing of an unofficial summary of each voters’ meeting for distribution to the families.  This year again, the Practicum is supervised by Professor Mensing, the local pastor where the students are in residence.

Professor Lietz’s classes meet on Tuesdays and Thursdays from ten o’clock in the morning until two o’clock in the afternoon.  Professor Mensing’s classes meet on Wednesdays from one until two o’clock in the afternoon and on Sunday and Thursday evenings from seven until ten o’clock.  There is also a Practicum Consult on Saturday morning from ten until about eleven o’clock.  All the classes meet at Peace in Oak Forest, since that is the residence of the matriculated students; and Professor Lietz has graciously elected to drive from Oak Park twice a week to teach his courses — for which the students are very grateful.  Jim Bielefeldt also travels —from Sauk Village, about half an hour to the south and east.  Jason Mabe is still working full-time to support his family, which means that his classes are necessarily restricted to evening sessions; but, by God’s grace, he and his family now live in Oak Forest, saving him a lot of travel time.  God-willing all of our students will be studying on a full-time basis beginning next September, and the matter of scheduling should be much easier to accomplish.

We professors humbly thank God for the “faithful men” He has given us as students in our seminary and for the opportunity we have to “commit to [them]” what we ourselves, by His grace, once “heard,” apprehended, and sincerely believed during and since our theological training; and we eagerly look forward, each and every day, to both the challenges and joys of teaching these young brethren.  As they “study to show [themselves] approved unto God,” let us keep them in our daily prayers regarding their health, well-being, and stamina, that they may pursue their studies with unflagging zeal and diligent labor for the Lord’s sake and for ours, as “[workmen] that [need] not to be ashamed, rightly dividing the Word of Truth” (II Timothy 2:15) and “who shall be able to teach others also.”  May He also grant that, by our example of love for His Word and of high esteem for the incumbents of the Holy Ministry in our midst, our students may be encouraged even now to anticipate one day having, at the call of the Holy Ghost, a flock of like-minded sheep and lambs to feed, tend and oversee for the Lord’s sake, that we may never lack a faithful shepherd’s leading.  God grant it for Jesus’ sake!